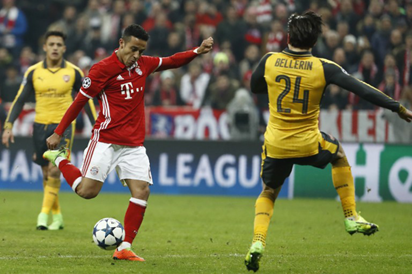 The German media poured praise on Carlo Ancelotti’s Bayern Munich on Thursday after their 5-1 drubbing of Arsenal allowed the Italian to step out of Pep Guardiola’s shadow.

Arjen Robben’s early goal was cancelled out by an Alexis Sanchez penalty, converted at the second-attempt, as it finished 1-1 at the break.

Robert Lewandowski restored Bayern’s lead by out-leaping the Arsenal defence on 53 minutes and 178 seconds later, his flick put Thiago behind the defence to make it 3-1.

The Spanish midfielder then banged home, via a deflection, from outside the area to effectively slam the door shut on Arsenal’s quarter-finals hopes.

Thomas Mueller simply completed the rout two minutes from time with a fifth goal off the bench.

As Bayern captain Philipp Lahm put it, “before the penalty, we were very good, up until half-time we weren’t really good, but after that we were sensational.”

– No room for Mueller –
Bild awarded Robben, Lewandowski and Thiago top marks, but arguably the biggest winner was Ancelotti.

Bayern’s performance allowed him at least a step out of the shadow of predecessor Guardiola.

“A horse jumps only as high as it needs to,” wrote Munich-based TZ.

“Against the Gunners, the Red steed had to leap. And it leapt, like Ancelotti said it would.”

Bild pointed out, “Ancelotti has found his first-choice team” with the same line-up which floored nearest challengers RB Leipzig in the Bundesliga last December.

Despite scoring, Mueller was a casualty on Bayern’s big night.

As ex-Germany captain Lothar Matthaeus pointed out, there is no room for misfiring Mueller in Ancelotti’s vision for Bayern.

He is so far having a season to forget and replaced Lewandowski for the last four minutes.

“When Mueller’s fit, he plays” insisted Guardiola during his three years, but Ancelotti’s first-choice is different.

With Douglas Costa on the left wing, Robben on the right and attacking midfielder Thiago feeding Lewandowski, there is no starting place for home-grown superstar Mueller.

“Ancelotti has decided for Thiago, and against Mueller, for the Number 10 role and with that, done everything right,” enthused magazine Kicker.

Die Welt agreed that “Carlo Ancelotti has found his Bayern boss” in Thiago.

– laid back Ancelotti –
Behind Sir Alex Ferguson and Wenger, Ancelotti is the third-most experienced coach in the Champions League’s history and oversaw his 148th European game on Wednesday.

After a series of mediocre Bundesliga performances, Ancelotti was under pressure to deliver and his team’s display charmed the critics.

“There was more dynamic, joy and determination than in all of Ancelotti’s games so far,” enthused Bild.

“He has proven he can get the big performances out of his stars in the big games.”

At Bayern, Guardiola is regarded as a good coach after he fulfilled the basic requirement of winning three consecutive Bundesliga titles.

However, critics point to his three straight semi-final exits in Europe when his team ran out of steam at the hands of Spanish opponents.

Guardiola’s predecessor Jupp Heynckes was the last to deliver the Champions League in 2013.

Leaders Bayern are coasting in the Bundesliga, yet are now amongst the favourites alongside Barcelona-thrashers Paris St-Germain for the Champions League.

After winning 14 titles with Barcelona, Guardiola failed in his bid to join the elite club of managers to win the title with two clubs.

This year’s final in Cardiff is way off, but Ancelotti can become the first coach to win the Champions League with three clubs after success with AC Milan and Real Madrid.

However, for Ancelotti, finishing off Arsenal in the March 7 return leg is now the priority.