Anthony Joshua: I won’t be world’s best until I unify heavyweight division 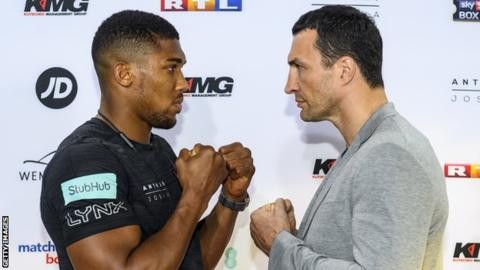 Britain’s Anthony Joshua believes he will not be recognised as the world’s leading heavyweight until he unifies the four divisions.

Joshua, 27, will defend his IBF heavyweight title against Ukraine’s Wladimir Klitschko at Wembley stadium on 29 April, with the vacant WBA title also on the line.

If he beats Klitschko, 40, he would be missing the WBC and WBO titles.

“You have to unify the division to gain that respect,” said Joshua.

“This [beating Klitschko] would definitely put you on a pedestal for sure. [But] I would never claim to be the universal heavyweight champion because I’ve never unified the division.

“That’s a status in itself, so in my opinion I need to do a bit more work before I can claim that.”

Joshua had previously said he can become “a legend overnight” by beating former champion Klitschko in front of a possible 90,000 spectators.

The former Olympic champion now believes he can go on to dominate the division, if he beats Klitschko.

“I can definitely push him aside and create a pathway for me to reign for a long time,” added Joshua, who has 18 knockouts from his 18 professional fights.