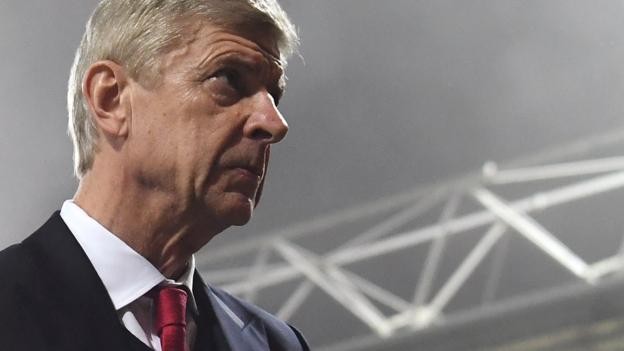 After Arsenal’s humiliating 5-1 defeat by Bayern Munich in the Champions League, there have been fresh questions about manager Arsene Wenger’s future.

But with a new contract offer remaining on the table, what is the situation around their manager of almost 21 years?

Arsenal, a post Christmas wobble and a probable Champions League last-16 exit. We’ve been here before. Is it any different this time?

For Arsenal, 2016-17 is turning into a carbon copy of the past six seasons – and even resembles the four before that.

The difference now is that it could genuinely spell the end for Arsene Wenger. Wednesday’s defeat has badly stung the 67-year-old Frenchman and senior figures at the club, while the anger, pain and disillusionment among supporters is stronger than ever.

Though the Gunners are not yet out of Europe, remain in the FA Cup and are fourth in the Premier League, it seems a growing majority of the fanbase believes Wenger should leave when his contract expires in the summer.

Neither the Arsenal board nor Wenger have ever been swayed by such opinion, but for the first time in his tenure I think there will be serious doubt on both sides about whether he should continue.

Should we read anything into so many former players, previously so loyal, saying they feel Wenger is coming to the end?

Given how well the likes of Ian Wright, Martin Keown and Lee Dixon know Wenger, their views should not be discarded. These are prominent and respected past squad members who, over the years, have tended to support the Frenchman and do still see him behind closed doors.

But, equally, views are not facts and these ex-players do not actually know what is going to happen.

Wenger has a very small circle of people he trusts and it is understood even they are in the dark over his intentions because, put simply, he is yet to make a decision.

Inside the club, what is thought to be the feeling of both the squad and officials on all the speculation?

The message from Arsenal is ‘business as usual’ before Monday’s FA Cup trip to Sutton United, which suddenly carries even greater importance.

However, there can be no hiding from the sense of deja vu, and those I spoke to on Thursday sounded both depressed by what they had witnessed in Munich and sick of the negativity engulfing the club again.

I hear of confusion among players and staff as to what is going on – there is no clear plan on or off the pitch – and certain individuals have sought information on Wenger’s future to no avail.

Some around the club think he will stay; others are adamant he is finished. Meanwhile, reports of angry post-match scenes in the dressing room will only add to what has become a tense and unhealthy environment.

With Wenger having a contract extension offer on the table, to what extent does he remain the master of his own future? Who else is key and what will be the key factors in any decision?

As the most successful and longest-serving manager in Arsenal history, Wenger will have the biggest say. However, it will not be the only say.

He and the board have enough respect for one other to hold mature discussions over whether signing a new contract is in the best interests of the club. In that sense, it will be a mutual decision.

All will have a stance, the most important being that of owner Kroenke Sr. He is said to be in favour of Wenger staying on, so if the manager is to leave it will likely have to be his own call.

Wenger assesses his position at the end of each campaign, so the next three months will be pivotal. Other possible considerations include his desire, Arsenal’s realistic prospects, the atmosphere inside and outside the club, and the state of any succession plans.

Ozil is already on record as saying Wenger is important to his future at the club. How important is Wenger to keeping some of the other star players?

In Wenger’s earlier years, many players joined Arsenal specifically to work under the Frenchman. They were fiercely loyal to him and if his future was in doubt then so was theirs. They openly spoke about it and, to this day, many credit him for their rise.

That pulling power has endured to an extent, yet for various reasons related to Wenger, Arsenal and the transfer market, it is not as strong.

Ozil praised his manager but did not say the 67-year-old was key to his future, more that he wanted to know who would be in charge as he ponders a new contract himself.

I can’t think of any other current player who has even mentioned Wenger when discussing their future.

Arsenal are confident they are now big enough to attract and retain players without needing to rely on the lure of Wenger.

Three Premier League titles, six FA Cups and never finishing outside the top four in 21 years. That’s quite a legacy. How much of a concern is the prospect of the unknown quantity of a post-Wenger era?

This must be a huge worry to Arsenal. Wenger has transformed the club into a major global power on and off the pitch, keeping them competitive in top-level domestic and European competition, with a new stadium built along the way.

It is an astonishing achievement – but such is the position that Wenger has put Arsenal in, especially financially, it is clear the board fear how they would fare without him.

If not, and they were serious about winning the Premier League and Champions League, surely with only three FA Cups to show for the past 12 years they would have given somebody else a go?

The reality is there is no guarantee the next manager will do better than Wenger and that is presumably why Arsenal have retained his services for so long.

Have we any indication what succession planning has been done and the sort of names or manager types Arsenal have in mind?

Gazidis used to joke about a drawer in his office containing contingency plans in the event of Wenger leaving, which he hoped would stay locked for many years. However, now that is a realistic prospect, it would be remiss of Gazidis not to have updated his files.

It has been reported that Borussia Dortmund coach Thomas Tuchel leads a four-man shortlist. The other three candidates are said to be Juventus boss Massimiliano Allegri, Bayer Leverkusen’s Roger Schmidt and Monaco manager Leonardo Jardim.

And finally, next up are Sutton United, Liverpool and Bayern Munich. How key are those three games to this situation?

For Arsenal, losing to Sutton does not bear thinking about. It would rank as one of greatest upsets of all time and is surely no way for Wenger to go out.

The Gunners are obviously clear favourites, but after the events of Munich the pressure will be even higher.

Liverpool away is huge for both sides in their quest for a top-four finish. Defeat, against a rival managed by Jurgen Klopp, who Arsenal have been linked with in the past, would further ratchet up the scrutiny surrounding Wenger’s position.

The return leg against Bayern has echoes of Arsenal’s tie against AC Milan in 2012, when they lost the first leg 3-0 and therefore needed four unanswered goals to progress.

They almost did it, but this Bayern side are far superior to that Milan team and they should confirm Arsenal’s exit in what may be Wenger’s final European game as the club’s manager.